Vaccine or no vaccine? That is the question.

End the myths surrounding Covid-19 vaccines and answer questions raised about new variants. These were the themes addressed by Samer Kassem, Chief Executive Officer of Aspen Global, during a conference organized by the South African Chamber of Commerce (SACC) for Mauritian business leaders at the Labourdonnais Waterfront hotel, Port-Louis.

In his speech, he gave a detailed overview of the different vaccines available and their respective characteristics, including their storage conditions and their effectiveness in different regions depending on the variants present. Several decision-makers from the local business community, journalists, as well as members of the SACC in Mauritius and Singapore – who participated by videoconference – were gathered on this occasion.

How are vaccines developed?

In the first part of his presentation, Samer Kassem briefly discussed the research and development work leading to vaccines, in particular the different types of methodologies to develop them, including RNA and the viral vector. He then dwelled on the various vaccines currently available and provided more details on the body of scientific data on their effectiveness and use. He also cautioned against fake news that are common on social media.“Let’s leave the science to the scientists and stick to the evidence. Today we have a great enemy: the lack of information and communication to the public, which causes many people to refuse to be vaccinated even though this is our main ray of hope for a back to normal”, he recalled.“RNA is a new technology that has been studied for several years. It was first used in the 1990s by Sanofi, but the delivery system used was toxic. In 2011, Novartis integrated RNA into lipid nanoparticles and successfully tested them in rats. It is this same technology that carries sequences of the virus so that the body makes its own antibodies.RNA vaccines can be developed faster than conventional vaccines. Indeed, the identification of the genetic sequence of the pathogen, the discovery of the coding segment of the antigen, and the production of the corresponding RNA can be done quite quickly. The massive funding obtained from developed countries and wealthy patrons, coupled with the acceleration of evaluation procedures by health authorities have strongly influenced the exceptionally short time to develop these vaccines”, said Samer Kassem, discussing the technology. of messenger RNA and the efficacy of vaccines against variants.The latter categorically denied the rumors about RNA. For the CEO of Aspen Global Incorporated, “there is no such thing”. However, messenger RNA vaccines have their drawbacks, such as side effects similar to influenza and restrictive storage conditions (very low temperatures). In addition, two doses are needed for them to be effective. New modes of administration are currently being developed, such as patches equipped with micro-needles that will gradually inject small doses of the vaccine.

There are fears about the new variants and their being more resistant to vaccines. The CEO of Aspen Global reassured that scientific studies still need to be conducted to demonstrate how these changes affect the actual effectiveness of available vaccines. “Those who have developed vaccines are working to update them so they can better target the variants that appear. As a result, coronavirus vaccines may need regular updating, as in the case of the flu. Given the advice of scientists, the most effective and fastest way to combat the danger of new variants is to vaccinate as many people as quickly as possible with the doses we have available”, he said. He added, “The next generation of vaccine will be crucial in our relentless fight against a changing virus. Several pharmaceutical companies are already working in this direction, and AstraZeneca has already announced a new vaccine by the end of this year to fight against the new variants”.

During his speech, Samer Kassem also presented a case study from Israel. To date, it is the only country where more than half of the population has been vaccinated. Studies of 600,000 vaccinated people show 94% less infection in this population compared to a population of 600,000 unvaccinated people. In addition, the vaccine prevented virtually all severe forms of the disease, thus supporting the results obtained in clinical trials. “This is another example that demonstrates the effectiveness of vaccines and the need to vaccinate as many people as possible to achieve herd immunity.”

Participants got a glimpse of the situation in Mauritius where almost 7,000 people have been vaccinated as of Friday, February 26. This figure will rise steadily to reach the 2,500 people the government wants to vaccinate on a daily basis in order to be able to reopen the borders in July 2021. About 60% of the population will need to be vaccinated to achieve herd immunity.“The Covid-19 pandemic is an unprecedented situation in which economies have been paralyzed. Being a small economy, Mauritius is heavily dependent on tourism and has therefore been severely affected. Today, it is of key importance to speed up the vaccination campaign by educating people and facilitating procedures in order to protect public health and above all, the economy since it is the livelihood of thousands of people. Mauritians who are at stake”. A question-and-answer session was held at the end of the presentation with members of the audience, who emphasized the type of vaccine they should use and their effectiveness, especially in the face of new variants. “SACC (Mauritius) is grateful to our speaker, Samer Kassem, CEO of Aspen Global Incorporated, for his very interesting presentation. He provided the audience with insightful information about the science behind the vaccine as well as a comprehensive comparison of the different options available.It is clear that the effectiveness of vaccines against Covid-19 will be a key factor for industries and financial markets, but also for personal well-being. We are very fortunate to have a leader in the pharmaceutical industry to demystify the latest information. Samer’s ideas are valuable and important as we move towards collective immunity in Mauritius”, said Bilal Adam, CEO. of the SACC, during his closing speech.

Sorting bins equipped with an IoT sensor in Moka 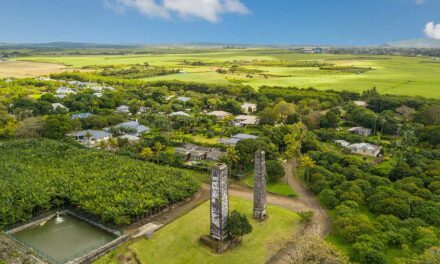